This Tess and Chayse moment is from Chaysing Dreams. Enjoy…

Just as the knife is about to strike down, stabbing Chayse in the back, Gem leaps up in the air. The guy with the knife is tackled, with Gem on top of him. Just as quickly, she snaps his neck with her fangs, as if he’s just one of the rabbits she had killed earlier. He is dead.

I fly there, ready to attack the guy who was about to swing at Chayse, but something catches me. I can’t move. It’s Chayse. He has grabbed me by my waist and is holding me back. I’m uncontrollably furious, wanting to get my revenge for hurting Chayse like this. I want to kill them.

“No, no,” Chayse whispers in my ears. “They can’t know. You promised.”

I try to get free of him, screaming at him to let me go. The men stop advancing, trying to process what’s happening.

One of them yells, “That bitch killed Ken!” He has his gun pointed toward Gem. Gem is growling at him, fangs exposed, ready to strike. She looks like a wild animal, about to attack for her next kill.

“That bitch killed Ken!” the man repeats. The man’s hand shakes as he’s holding his gun. He’s terrified of Gem.

“Please!” Chayse says. “She was just protecting me. Nobody else will get hurt. I told you, I’ll go with you willingly.”

Chayse still has a hold of me. He sounds defeated. I quickly glance up at him. His bottom lip is bleeding, and his cheek is bruised.

“Who the hell is this girl?” another man asks.

“She’s a friend, that’s all. She’s harmless. You have no need for her,” Chayse replies.

“A friend, huh? So all the female clothes we saw in the house must have been hers. Seems like she’s more than a friend. And you won’t be telling us who we’ll be needing!” It appears as though this man may be the leader. He walks up to me. He has dark hair, a beard that’s a tangled mess, and beady brown eyes. He has a scar about two inches long by his right eye. He smells like filth. He slowly inspects me from top to bottom, and a nasty grin forms on his face.

“I like what I see,” he continues. The man starts to reach his nasty hand toward me to touch my hair.

Chayse grabs his arm midway. “If you even think about touching her, I promise you, I will rip your heart out.” His tone is deadly enough to stop the leader in his tracks. 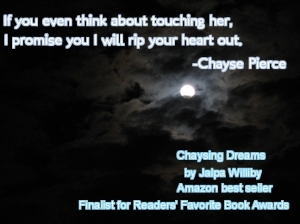 Posted on October 30, 2014, in Uncategorized. Bookmark the permalink. Leave a comment.