Broken (Chap 3) from Loving You Hurts So Good

Happy Monday! Here’s Chapter 3 of Broken. Before you read it, please make sure you’ve read Chapters 1 and 2. Here’s the LINK 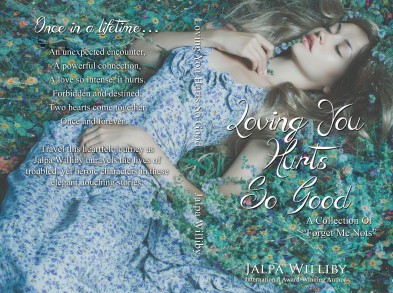 Later that night, Jed wasn’t surprised when Nick walked into his room.

“Hey, how are you doing, bud?” he asked, taking a seat on the recliner next to the bed. When Jed remained silent and continued watching the television, Nick said, “Who the hell was she to get that kind of response out of you?”

“Of course it matters. It mattered to everybody at that table, including Sage. She looked like she saw a ghost. What’s the story?”

Taking a deep breath, Jed turned to Nick. “Same old story. She was Trina’s best friend growing up, but she’s my age. I guess we always had a thing for one another, and finally in high school, we decided to date. That was probably our first mistake because we got serious fast. It got so intense that we were even talking marriage by the time senior year came around. We were inseparable. I truly believed I loved her.” Jed rubbed his face, trying not to remember the emotional connection.

“Same shit, man. We were too damn young. It was bound to end. Graduation came around, and she got into Harvard. She was absolutely brilliant. That was her dream college, and who the hell was I to stop her from following her dreams? When she told me she was accepted, I encouraged her to go. But selfishly, I wanted her to decline and choose to stay with me. She asked me to go with her. It was nuts. I wasn’t going to follow her there; we both knew it. I told her if she was leaving, I was moving to LA to follow my own dreams. She was devastated and angry. She said she was going for her education, and I should support her. She didn’t understand why I’d leave for LA when I didn’t even have a plan.

“That’s the thing. We were both too different. She always knew what she wanted out of life. She was a planner. She wanted to go to top colleges and be a doctor. She wanted to go to third world countries and help them once she was a licensed physician. Sage wanted to make a difference in this world. But me? I lived for the moment. I had no plans at all. I knew I wanted to be a musician, but I had no idea how the hell I was going to accomplish that. I just figured things out as I went along. Completely opposite than her.

“We had still decided that we’d try to make it work long distance. But soon, she got busy with her studies, and I got busy with my life. I didn’t care, though. I was willing to not have that ‘perfect’ relationship as long as she was still mine. Eventually, Sage just told me it wasn’t going to work. That we were fooling ourselves. I told her I’d fly out there, and we should talk about it face to face. She refused, saying it was a waste of time. She explained that we tried, and it didn’t work. She told me good luck with my life, and that was the end of that.”

Jed laughed sarcastically under his breath. “At first, I told myself she just needed some time. That we both will figure it out. I mean, after all, we loved each other. But, it didn’t work out that way. We both moved on. Believe it or not, I was never able to forgive her for breaking up with me over the phone like that and refusing to see me. So, I buried myself in my music. Soon, you saw me playing at my gig at that bar, and the rest is history. I’ve never returned back home until now. And to my knowledge, Sage never really comes here either. I knew she was in Brazil working recently, so I had no idea I’d be running into her. I mean, shit, what kind of luck do I have? Seeing her was bad enough, but the fact that she saw me in my wheelchair…damn it! I didn’t want her to see me like this.”

“Well, if it helps any, she was just as shocked to see you. Maybe both of you need to talk or something. Seems like you guys may have a lot of catching up to do.”

“I want nothing to do with her,” Jed suddenly shouted. “I don’t want her anywhere near me. What good can it possibly do? The past needs to stay in the past.”

“All right, all right, I get it. It’s just that I’ve never seen you react to any woman like you did to her. I mean, don’t get me wrong. She is a beauty, that’s for sure, but I’ve never seen that side of you. Is she married or anything?”

“No, she never married. The only reason I know is because Trina slips updates on Sage here and there. She knows I don’t want to hear about it, but somehow, she’ll still manage to throw the information in the middle of a casual conversation.”

Nick laughed. “Yeah, I can see that about your sis. Okay, back to business, what are your plans?”

Jed brushed his hand through his tousled hair, trying to figure out how to get his life in order. “I don’t know. I have no answers for you. I appreciate you coming out here, but I just need some time.”

“Okay, man. I’m gonna keep calling and nagging you, though. I’ll also be back next month.”

Remember, all of my books are free on Kindle Unlimited. Hope you all have a fabulous week!