On Feb 16th, my seventh novel, Fate’s Roar, will be released! Yikes!

Special introductory price of only 99cents on Kindle. (Limited time) 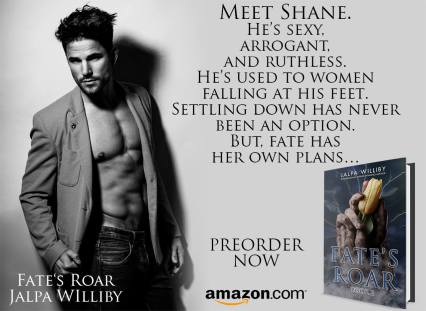 They were in that burning house. He could feel it. As he dove down, hoping he wasn’t too late, Shane felt the hot, crackling wind, accompanied by thick, black smoke, whipping around him. The flames rose high, daring him to come closer, hissing and roaring.

He had no time to worry about the raging inferno. Without a second thought, he crashed through the roof of the house and plunged downward to where his brother’s ring was calling out to him. Shane wasn’t worried about his flesh being burned because he knew he would heal quickly. On the other hand, Damien and Kelsey were mere humans. All he could do was pray they were still alive.

Shane allowed his senses to take over, and within seconds, he was standing next to both of their bodies. Snatching them up in his arms, he flew out of the burning house, making sure to cover them with his own body in order to protect them from the flames. As soon as he had them a safe distance away from the blazing building that was on the verge of collapsing, he placed them down on the ground.

“Damien! Come on, open your eyes!” Shane was desperate as he shook him. He wouldn’t allow his brother to die like this.

Shane could hear Damien and Kelsey’s heartbeats, but just barely. If only Damien hadn’t decided to become a human, he would already be healed. Pushing the thought away, Shane forced himself to focus on the current situation. He had to get Damien and Kelsey help before it was too late.

When he heard voices not too far away, Shane leapt back up to his feet. Carrying Damien and Kelsey in his arms, he sprinted toward the sound. Within seconds, he was standing behind tall bushes, watching a woman and a young girl next to her.

“Mom, I’m worried about Aunt Kelsey.” The young girl stared at the fire, looking terrified at the sight.

“It’s okay, Samantha. Help is on its way. Besides, Damien is with her, so I’m sure they got out,” the mother said, trying to reassure her daughter.

“How could they have? Look at the fire, Mom! Damien was shot, remember?” The girl was pulling on her mom’s shirt, trying to hold back her panic.

Shane cringed when he heard that Damien was shot. He had smelled blood, but wasn’t sure what the injury was from. He was at least glad he saw a man’s dead body in the woods as he was approaching the house. He presumed that body must belong to the lunatic serial killer that had been after Kelsey. Realizing he couldn’t afford to waste another second, he shifted into his human form. While still holding Damien and Kelsey in his arms, he approached the woman and her daughter.

As soon as the woman saw him, she instantly pointed her gun at Shane. “Stop where you are. I’ll shoot.”

“It’s okay. I’m not here to hurt you. I’m Damien’s brother. Kelsey and Damien need your help.” Shane placed their bodies down so the woman could get a closer look.

“It’s Kelsey!” the young girl exclaimed, and she began to run toward them.

Her mother grabbed her from behind and held her back. “Stop, Samantha! We don’t know this person!”

“Please, they need help,” Shane begged as he kneeled next to his brother. What if this woman refused to help? Should he take Damien and Kelsey to the nearest hospital? Shane knew there wasn’t enough time for that, though. They were barely hanging on. He should just grab the woman and make her help.

“Help is on its way. Don’t move!” the woman commanded, the gun still pointing at Shane. “There’s a crazy killer on the loose.”

“You don’t need to worry about him anymore. He’s dead. I saw his body with my own eyes,” Shane assured her. “I can’t stay here. You need to help Damien and Kelsey. They’re barely breathing.” Shane was just about to use his powers to force the woman to cooperate, but he noticed she lowered the gun and walked toward him, still holding her daughter’s hand.

As soon as she approached them, the woman collapsed next to Kelsey. “Dear God,” she whispered. “It’s the smoke inhalation.” Immediately, she started CPR on Kelsey.

Following her lead, Shane began to do the same with Damien. When he felt the young girl standing close to him, he glanced up at her. Wide, amber eyes with tiny gold specks stared back at him in awe. For a split second, he was lost. In that instant, time had stopped, and he had to fight hard to maintain his focus. What was it about this innocent girl who was watching him so intently?

Knowing he had to ensure that the mother and the daughter forgot about him, he used his powers to get into the young girl’s head. He decided that soon as he was done with her, he’d do the same with her mother. Since she was busy with Kelsey, the mother didn’t notice Shane whisper to the girl. “You will not remember seeing me. All you know is somehow Damien and Kelsey were able to get out. When I count to three, you will close your eyes. One, two, three.”

The young girl did not close her eyes. Instead, she watched him curiously. “Are you a superhero?” she whispered.

Shane shook his head in shock. His powers hadn’t worked on her. How could that be? It was impossible! He tried it again, but the girl continued to resist his powers. He could even feel some type of a barrier in her mind—a barrier he couldn’t break.

“Why are you naked?” she asked out loud.

“Samantha!” her mother scolded as she continued desperately with CPR.

Shane had completely forgotten about his appearance. When he had shifted into a human, he didn’t have any clothes he could put on. It was the least of his priorities given the circumstances.

“I’m sorry, but I must go,” Shane said to the mother. “I believe your help is almost here. At least Kelsey and Damien are breathing a bit stronger now. I would appreciate it if you don’t mention me to the authorities. Please just tell them they were able to get out from the burning house, but soon passed out.” Shane’s acute sense of hearing could already hear the emergency sirens in the distance.

The mother stood back up and blinked several times, as if trying to decide. The young girl stepped closer to him and said, “Thank you for saving Aunt Kelsey. We will keep your secret. Right, Mom?” She looked up at her mother, waiting for her to agree.

Shane contemplated whether he should use his powers on the mother to make her forget seeing him. He quickly changed his mind, though, not wanting the burden of keeping his secret to solely fall on the young girl.

He took a step closer to the mother and daughter team. “My name is Shane. I’m Damien’s younger brother. Please take care of my brother and Kelsey. I will come to the hospital as soon as I possibly can.”

The mother nodded. “I’m Sofia, and this is my daughter, Samantha.” Sofia still seemed hesitant, but relieved that Damien and Kelsey were out of the fire.

“Aunt Kelsey calls me Sammy. You can call me Sammy, too,” the young girl softly chimed in.

Shane’s attention fell on her once again. He threw her a slight smile and said, “Thank you for being so brave, little Sammy. And thank you for keeping my secret.” When the sirens were becoming louder, he turned back to the mother. “I must go.”

Without another word, Shane turned and disappeared into the night. All the while, he could feel the young girl’s haunting eyes boring into him.

Check out the dream cast: 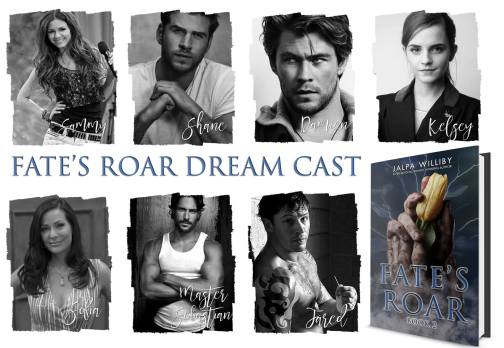