Disclaimer: I own no rights to Sense8 or the characters. I’m simply writing this fan fiction to provide some closure to myself, as well as hopefully, other die-hard fans who are feeling lost like me. 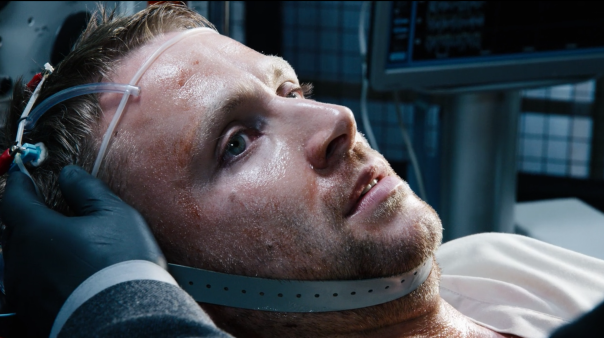 Wolfgang could tell he wasn’t alone. He contemplated whether he should open his eyes or pretend that he was still passed out. But the pacing back and forth with the clunking of the shoes on the hard floor was annoying the hell out of him.

Reluctantly, he opened his eyes, only to regret it as soon as he saw her.

“Well, well, so he rises again. You’re very stubborn, Wolfgang. Why don’t you do us all a favor and tell us where Whispers is,” Lila said, flashing her cunning smile.

“Leave me the fuck alone,” Wolfgang said, turning away from her. He didn’t recognize his own voice. His throat was dry, and it hurt. He couldn’t remember the last time they’d given him some water.

Lila grabbed his face and forcefully turned it back toward her. Her smile was now gone, her face and eyes had hardened. He’d seen this look before. It was the same determined look right before her kills.

“What do you want?” he asked. “Don’t you have people from your own cluster you can visit? Maybe they’ll appreciate your company more.”

That made Lila laugh. “You’re so naïve, Wolfgang. I’m not visiting you. No, sir. I’m actually here, right before your eyes.”

Wolfgang scanned the room and realized she was right. She truly was there. “You work for BPO, I presume.”

“I do now,” she agreed. “You see, the difference between you and me is that I’m a survivor. I’ll do whatever I have to do for self-preservation.”

“Again, I ask you, what the hell do you want from me?”

“Where are Whispers and Jonas?” she asked.

“Last time I checked, Whispers was in this room with me, torturing me. Remember? How the hell would I know where he is? I’ve been tied up here,” Wolfgang said, being very careful not to give anything away.

“You’ve had your cluster visiting you. And I know you can visit them. Find me Whispers,” she demanded.

“I’m sure they’re on blockers. How the fuck am I supposed to visit them?”

“Lies! I know at least one was here earlier. I’m assuming it was that Kala girl. Yeah, that’s right, I know her name, baby. Do you think Whispers wouldn’t tell me the information he has retreived from you? I work for him now, and he wants me to bring your cluster in. And now, he’s gone missing. So, we can do this the easy way or the hard way. Your choice,” Lila threatened.

“You can do whatever the hell you want,” Wolfgang hissed. “I can’t give you information I don’t have.”

“We’ll see,” she purred. With that, she took a knife and without any warning, stabbed it through his hand that was still tied up.

Wolfgang yelled in agony as the pain pierced through his body.

Kala screamed and tumbled to the floor, holding her left hand. She rolled into a fetal position, the pain unbearable.

“What is happening?” Capheus demanded, kneeling down and rolling Kala over, so he could get a better look.

The rest of the cluster hovered around her, concerned for their friend.

“It’s his hand,” Kala mumbled. “They did something. They’re torturing him again.” She couldn’t stop the tears from falling, knowing if it hurt her this bad, she could only imagine what it was doing to Wolfgang.

“She’s on blockers, though,” Sun said.

“Yeah, how is she feeling this?” Will asked.

“Because her connection to Wolfgang is very strong. Even with the blockers, I think she will be able to feel anything that’s intense,” Riley said.

“Now that Riley, Cepheus, and Lito are back with Whispers’ address, we have to go talk to him,” Sun said, facing Will. “I think he will crack.”

“No, I will be the only one talking to him. I don’t want any of you near him. Even with the blindfold on, he’s extremely dangerous. I don’t want him to hear your voice…your accent. We can’t take any chances,” Will said.

“Do you not think they can hear all this yelling we are doing through that thin door?” Sun asked.

Will signed. “Maybe so, but I still don’t want any of you near him. I don’t trust him. Believe me, the less he knows about the rest of you, the better. I’ll go and interrogate him now.”

But before he could go, Kala screamed again in pain. This time, she was holding her foot. Jamie and Amanita grabbed Kala and pulled her in their arms, hoping to give her some comfort.

“All you have to do is give me what I want, Wolfgang. It’s not like I enjoy torturing you,” Lila said, batting her eyes. “I mean just find out where they’re hiding Whispers.”

Wolfgang was clenching his teeth, refusing to allow her to break him. He would die before he’d sell his friends out. “Fuck you,” he whispered, his eyes full of hatred.

“Okay, perhaps I lied. Maybe I do enjoy torturing you. Hmm, let’s see, I think it would be kind of fun to play with you ear now.” She teased him with the sharp blade brushing against his ear. “Or better yet, perhaps I can take out one of your eyes. It just kind of sucks that I have to do this because you have such a beautiful face.” Lila continued to stroke his face with the knife. “Oh well, easy come, easy go.”

Kala saw Lila raise her knife, aiming for Wolfgang’s eye. Filled with rage, she reacted. With all the strength she possessed, Kala leaped toward Lila to stop her. Within seconds, Lila was on the ground, and Kala was on top of her. Instinctively, Kala began swinging, her rage about to explode. She had no idea how she was doing this, but she knew she had to stop Lila before she hurt Wolfgang any more.

“What the hell is going on?” Lila screamed, trying to cover her face from the invisible force.

Wolfgang couldn’t believe his eyes. How the hell was Kala able to visit him and fight this crazy bitch?

“What’s going on in there?” a voice demanded. “That’s enough for today, Lila. I don’t know why you’re rolling around on the floor. Come out! We need to talk.”

Kala stood up and watched Lila pull herself to standing. “This is not over yet,” Lila whispered to Wolfgang before leaving.

All Wolfgang could do was to stare at the love of his life before him. He could still feel the steam blowing out of her ears from fury. He wanted to pull her in his arms and protect her from the evil surrounding them. But, he didn’t dare acknowledge her presence. He knew he was being watched, and there was no way, he’d jeopardize Kala’s safety. But damn, he wanted to ask her so badly how the hell she did what she did.

Seeing his hand and foot soaked in blood, it was all she could do to not drape her body over him to protect him from further harm. She leaned toward him and kissed his lips. “I’m coming for you. Don’t you give up. I promise we’re getting you out of here.”

“What the fuck happened?” Lito asked.

Kala opened her eyes and Will, Sun, and Capheus were holding her down. “I’m okay now,” she whispered.

“You were swinging at somebody,” Will stated.

“It was Lila. She was going to stab Wolfgang through his eye.”

“I stopped her.” Kala stood up and faced them. “Somehow, I was able to tackle her and stop her. It was like I was actually there. But it was better because she couldn’t see me.”

“What do you mean? It wasn’t through Wolfgang’s body?” Will asked.

“No, he was tied up. I’m telling you, I was so angry. I literally wanted to tear her heart out. I lost all control. Usually, I pride myself in keeping my control. But this was different. I became somebody else…I just reacted. I knew I had to stop her. And so I jumped on top of her and she felt my force. She was knocked down.” Kala frowned. “Do you know what this means? There’s so much more we can do. We just have to figure out how to do it.”

“Okay, noted. We will need to explore that because it’ll come in handy. I believe I’ve noticed such incidences in the past with us, although they were subtle. Right now, though, I need to know if he’s okay. What are they doing to him?” Will asked.

“For now, he’s okay. I think she stabbed his hand and foot. But then she got called out. Some male voice spoke in the intercom and said he needed to speak with her. We have to get Wolfgang out of there. I don’t know how long he can last.” Kala’s voice quivered just thinking about what was happening to Wolfgang.

“Don’t worry. I’m about to give Whispers and Jonas a taste of their own medicine,” Will hissed, furious with the new information about Wolfgang. With that, he entered the bedroom where the hostages were held and shut the door behind him.

Note: On June 29th it was announced that Sense8 will be back! For now, there will be a two hour special some time next year. YES!! YES!!! YES!!! I was desperately seeking closure, so FINALLY, it has been confirmed that we will be getting it from the brilliant writers who created this amazing story. On that note, I will now stop this fan fiction here and get back to writing my own stories. Yes, I did become completely nonfunctional when this show was cancelled. But now, I’m doing my happy dance and getting my groove back.

Stay tuned for Girl Behind The Veil. Coming your way in the next few months!