I am so so excited to share that Girl Behind The Veil won not one, but two gold medals!

FAPA (Florida Authors & Publishers Association) President’s Book Awards announced the winners recently. In their Romance Suspense category, Girl Behind The Veil took gold! I was completely surprised because I know it’s a tough competition, especially in that category. Additionally, the judges are industry professionals, publishers, and librarians. So, for them to read the story, and then award it the gold medal, is truly a humbling experience. Thank you, thank you!

This weekend, Readers’ Favorite International Book Awards just released their winners. I am honored that this heartfelt story won in Fiction Cultural category. Again, I wasn’t expecting to get first place. When I saw the list, I was shocked and had to refresh the page to make sure I saw it correctly.

Honestly, as authors, we put our heart and soul into our stories. We create these beautiful characters, and we cry with them, feel their pain, joy, fear, and triumph. Our books are our babies, and to be recognized for all the sweat and tears that was put into the writing…well, honestly, I am beyond grateful.

Girl Behind The Veil is especially emotional to me because the main character (Salena) is a victim of human trafficking. I wanted to write about this important topic because we need to do so much more with this worldwide problem. I hope with this story, it not only raises awareness, but inspires people to do something about such a horrific tragedy.

I also bring up cultural diversities, stereotypes, and acceptance. Many times, family and society say one thing, but the heart says the opposite. I can completely relate to this since I was raised in United States, but my parents are from India. It’s actually quite common to feel like you’re living two different lives (one consisting of traditional values and the other consisting of more modern, western values).

In each story I write, I leave a piece of me behind. If you haven’t read Girl Behind The Veil yet, I’d love for you to check it out. I promise it’s a story that will stay with you forever. Here’s the link: Amazon

I am proud of the recognition the rest of my books have received. Yay! Go me!

As always, thank you for your support! Have a great week! 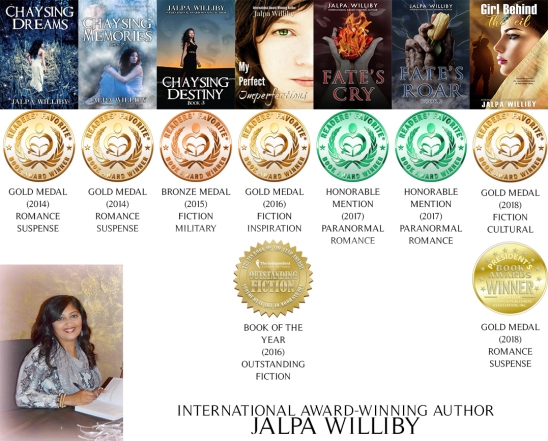 Readers’ Favorite Review of Girl Behind The Veil

I earned that beautiful five star seal from Readers’ Favorite for Girl Behind The Veil! This story was really emotional to write. I loved Salena and Kaden’s characters and their story, but more importantly, I wanted to raise awareness of human/sex trafficking, life after trauma, stereotypes of different cultures/races, and cross-cultural relationships. I wanted the readers to feel what Salena was going through…to understand her pain and her struggles. Although the story is a romantic suspense, it is so, so much more. I am ecstatic and relieved that these professional reviewers were able to see what the story truly was about.

Jalpa Williby exposes the horrific world of human trafficking in Girl Behind the Veil. Special Forces operative Kaden Reid goes undercover to rescue a young woman from a human trafficking ring in Pakistan. His mission objective – act as a client, buy her, get her out and return her safely to her father. The mission is a success, but the girl hidden behind the veil with the beautiful gray eyes pierces his soul. Salena Hamas is delivered safely to her father, but she is forever haunted by her kidnapping. Burying the tragic incident deep inside, Salena finishes college and becomes a successful journalist for the New York Times. But, Salena isolates herself behind an invisible veil. When she attends a charity event to raise awareness of human trafficking, her past collides with her present. Her hero, her savior, Kaden Reid, reappears. The opposite worlds of Kaden and Salena intersect once again. They spend a wonderful life-changing week together, but will their relationship survive another goodbye? Salena returns to work, Kaden goes on another covert mission. Their love is powerful, however, days apart turn into endless silent months; doubt, fear, and heartache overshadow Kaden’s parting words, “Wait for me.”

Girl Behind the Veil is the first book of Jalpa Williby’s The Invisible Veil series. Williby writes an unforgettable, gripping and passionate story of overcoming tragedy. Although suspenseful and romantic, the story focuses on the post-traumatic effect of sexual abuse on its victim. The heroine is beautiful and fragile, intelligent and defiant, desiring security and stability. She is paired up with a masculine, duty or die, honorable yet tender “restless soul.” The supporting cast consists of a doting traditional father, a vindictive woman from the past, new and forever friends. The plot turns predictable, then bam! Suddenly, it hits you with shocking surprises. It is an emotional landslide to the very end. Jalpa Williby writes to inspire. In Girl Behind the Veil, she raises awareness of human trafficking and cultural differences by creating dynamic characters and bringing their tragic story to life – from victim to victor.

Girl Behind the Veil by Jalpa Williby is the first in The Invisible Veil Series. When Salena is kidnapped by human traffickers while visiting her father in Pakistan, Kaden Reid is sent in to retrieve her as a part of his Special Forces duties. What he doesn’t expect is the gray-eyed woman to haunt his every moment for the next four years. However, as fate would have it, he finally sees her again at an award ceremony in his honor. Salena, on the other hand, is still traumatized by the incident of all those years ago, opting to channel her recovery into journalism, working for The New York Times. Yet, Kaden is not the only one haunted by specters of the past. After a memorable week in Chicago, the pair part, but is it the end of their romance, or just the beginning?

Having read Miss Williby’s novels in the past, I knew I could expect a story that would capture my attention from beginning to end. I found both characters, Kaden and Salena, believable; however, there were parts where Kaden frustrated me beyond belief, as did Salena. I think that’s what makes a really good novel, when the characters are flawed and do things that make you want to throw the book against the wall. The addition of human trafficking made the story relatable to a great deal of current events going on in the world, as did Salena’s drive to help victims in similar circumstances to her own. Overall, I was highly impressed with this first book in the series. I will note, the end of the book is not the end of Kaden and Salena’s story, and there is a teaser of things that will come in book two! Girl Behind the Veil by Jalpa Williby is an excellent example of romantic suspense, and I will be eagerly seeking the second installment when it comes out!

Girl Behind The Veil (The Invisible Veil Series Book 1) begins like many others with the hero on a mission to rescue a nineteen-year-old girl from the slave trade. This is what he does for a living. What he does not expect is that he will be attracted to her, and she will see him as her saviour and fall for him. However, I did not see this as primarily a love story but the colliding of two worlds; she is Muslim, brought up in England and now working in New York, while he’s all American. Despite her western education and her father’s campaigning in their native Pakistan for women’s rights, there is still a gulf between them. This is handled very sensitively by the author and I would be amazed if the reader didn’t connect deeply with Azmia/Salena, a woman of today caught between an ancient paternalistic culture and modern western ways. Her rescue successful, Kaden, her saviour, and she part ways, never expecting to see each other again – however, four years later …

I am a great fan of this author. Jalpa Williby paints such vivid pictures with her words. You feel as if you are on the run from the human traffickers, hiding out in the cave, racing to freedom across the wild Pakistani countryside. The story is realistic. Salena’s emotions are just right, neither too hysterical nor dismissive. We suffer with her at every step of the way. The time Kaden and Salena spend together keeps the reader engaged, asking ‘Will they or won’t they?’ I was genuinely worried about her father’s reactions, despite his views on female emancipation (I’m struggling not to give any spoilers here), and every time Salena meets her father the tension rises. While this may be read as a love story, the issues are far, far deeper – the human slave trade, trauma, cross cultural relationships. It’s a story that will stay with you long after you’ve read the last page. I only have one big problem. The moment I finished I immediately went on line to find the next book in the series … only to discover it’s not out yet! I shall be waiting for it the moment it’s published. A well deserved 5 stars from me for an author who writes great stories and whose books I love.

Girl Behind The Veil is available on: Amazon